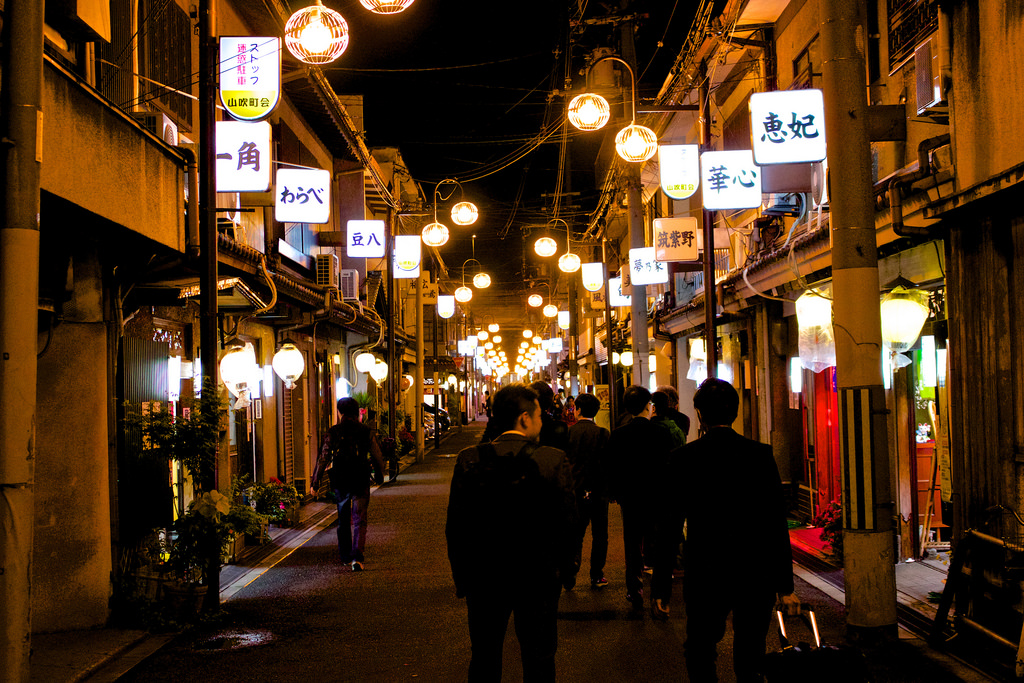 I booked for 30 minutes but only lasted 12 minutes.

After my last attempt to find a great bar starting with J with only apathy and disappointment as a result, I had a three-month hiatus where I couldn’t possibly commit my words to paper (or WordPress).

During this time I made a very short stop in the land of the rising sun.

Fair warning, kids. This is a two parter.

While my visit to Japan wasn’t under the banner of exploration, I did manage to get a few days exploring the seedier side of Osaka. I’m going to describe – in boring but graphic detail – two experiences that I think every gentleman should have.

The first I’d like to talk about is Tobita Shinchi in Osaka. I had advice from a good pal to get the train from Umeda to some god-forsaken fuck hole in the middle of this sprawling metropolis. (If you need instructions, check here). Then walk down an arcade and turn left just after the supermarket. You’ll know when you’re in the area because, well, it’s basically AMSTER-FUCKING-DAM.

So the first thing you notice, when you’ve found the place you’re looking for, is that this is a village dedicated and focused on extracting the money from your wallet as fast as the sperm from your penis.

The streets – about 8 to 10 blocks – are door-to-door mini brothels. As you walk down the street older mamasans call out “Onisan!”. Or in my I got maybe 3 out of 40 calling out to me while the others looked at me in disgust. It’s easy just to smile and walk on, but I couldn’t help but feel racially excluded in Japan – and it was made extra clear that – in some places in Tobita – I was not always wanted.

After perusing the streets for about 35 minutes and trying to find the gaijin friendly places I realised how frequently the girls were transitioning between clients. I was there during daylight hours initially, but many guys – some in blacked out vans – were cruising, looking for their Geisha Doll.

I nervously asked a mamasan who was perched like an ibis beside a beautiful young girl if “Gaijin okay?”. She nodded, I looked at the girl, she also nodded – hungrily. I was about to take my first step into Japanese underculture.

I had paid 21,000 yen (about 180 USD) for 30 minutes with this girl, and I was honestly nervous about going too long.  We walked in, I fucked up where shoes can go and where they can’t. I apologised, in broken Japanese.

I found out that her name was Aya and she was studying law (or accounting – I’m still not quite sure). We exchanged pleasantries and she told me to take off my clothes and she would be back.

Before I knew it she was on top giving me the experience of an ex (Korean) that made me even harder. Basically she had straddled me, facing me, and was doing squats on my dick. Wonderful.

3m 40s in I took control and moved her on her back so I could see her completely. Her (admittedly small, but perfectly shaped) boobs were longing to be licked. Her pussy was absolutely perfect. And she even let me finger her asshole while I fucked her from behind. I was in heaven.

And then I blew.

I don’t know if I’ve ever seen a condom so full.

And we’re only maybe 7 minutes in.

She looked happy that I’d filled the condom with sticky hot sperm and semen. Nearly greedy. I said  for not lasting longer. She blushed and said something I’ll probably never understand.

We both got dressed and smiled awkwardly while having a short conversation using Google Translate.

I walked back downstairs where the mamasan offered me an umbrella (it had srtarted raining). I declined as I already had one.

Sure the cost is $180 for 30 mins, but these girls have trained hard and deliver. Man, Aya’s pussy was tight. Unbeleivable.

The thing to remember about this area is to be polite, and not get upset when someone gives you a cats arse look to say that your dick is never touching their perfect vagina.